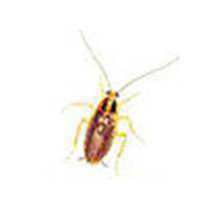 Characteristics: Generally two pairs of wings, although these may be reduced or even absent; forewings have well developed veins and tend to be hardened, they overlap down the mid-dorsal line; membranous hindwings are folded below forewings; long whip-like, many segmented antennae; omnivorous, with mouth parts adapted for biting; tarsi , 5-segmented; incomplete metamorphosis, with egg and nymph stages.

The nymphs of all species are similar in appearance to the adult but smaller. Immediately after hatching or moulting the nymphs are white, but the cuticle soon darkens to the normal colour.

Cockroaches are common in commercial premises associated with the production or handling of food. Also in public buildings and domestic premises e.g. apartment blocks. Gregarious and nocturnal, they spend the day hiding in cracks and crevices around such areas as sinks, drains, cookers, the backs of cupboards and in refrigerator motor compartments. They especially favour buildings with service ducts and complex plumbing installations. Infestations may be introduced as egg cases or adult in incoming laundry, on raw materials, in crates and packaging, or arise as the insects enter buildings via such routes as drains or refuse chutes.

B. orientalis and B. germanica are the most common species in Northern Europe. They are occasionally found together, but B. germanica generally prefers warmer, humid environments, e.g. centrally heated buildings, whilst B. orientalis is frequently encountered in cooler, less humid areas such as basements and drains. P. americana and P. australasiae are tropical and sub-tropical species but are also found in ports and shipping areas in temperate climates.

Cockroaches are potential vectors of diseases such as dysentery, gastroenteritis, typhoid and poliomyelitis. Their diet is omnivorous and includes fermenting substances, soiled septic dressings, hair, leather, parchment, wallpaper, faeces and food for human consumption. The latter may be contaminated either by the mechanical transfer of causative agents of disease from the insect's body, or by transmission in the faeces. An outbreak of food poisoning in a Brussels hospital subsided immediately an infestation of B. germanica was controlled.

Cockroaches and their faeces may cause allergic reactions especially amongst sensitive individuals e.g. asthmatics. Exposure may result from ingestion or through the inhalation of material derived from cockroaches in airborne dust. In addition, food may be tainted with the characteristic smell of the cockroach, which is produced by faeces and salivary/abdominal gland secretions, or by the dead insects.

Successful control of cockroaches is a complex subject, and depends very much upon tailoring control measures to the species concerned.

An assessment of the infestation must be made to determine the species and extent of the infestation. Plans of the area will be required. The entire site should be inspected, including where appropriate adjoining premises, normally inaccessible places, drains etc. A night survey is useful as this is the time of maximum insect activity. The survey may be carried out using cockroach monitoring traps, searching for droppings, cast skins and egg cases etc. A pyrethroid-based aerosol sprayed around and into potential hiding places will flush out cockroaches (other than the Oriental Cockroach).