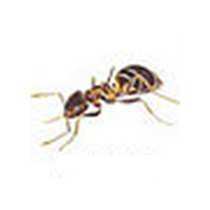 In Britain comparatively few indigenous species, which nest outdoors, are likely to enter houses regularly. One such species is the Common Black Ant (Lasius niger). An active insect, it nests outside in grass and walls and under paving. It will forage widely in search of food, which is how it comes to enter domestic premises.

Foraging worker ants cause a nuisance as they travel widely in search of food, following well-defined trails and clustering around the food source. Sweet foods are preferred.

In gardens their excavations around plant roots make the soil excessively dry. They will also cultivate greenfly, themselves pests, in order to obtain the sugary honeydew secretions that these aphids produce. On the other hand they can be beneficial as predators of other insects and general scavengers. They are obviously an unpleasant sight and may damage food used for human consumption.

The gregarious habits of ants have resulted in the development of a caste system, whereby individuals are responsible for specialised duties within the community. There are: workers (sterile females); fertile males; and queens (fertile females). The worker ants build and extend the nest, look after larval forms and forage for food, whereby they become pests. The queens perform none of these duties, but remain almost exclusively within the nest. Mating amongst sexual individuals takes place on the wing. These spectacular swarms involve large number of ants.

The actual swarms only persist for 2-3 hours. After mating the males perish but the females shed their wings and dig a cell in the soil where they overwinter.

The eggs are laid in late spring and the white legless larvae hatch 3-4 weeks later. The larvae are fed on secretions from the queen's salivary glands until fully grown, when they will pupate, forming the well-known "ant eggs". From these pupae emerge the first brood of worker ants. These workers take over foraging duties and tend subsequent broods. The sexual forms are not produced until later. The entire cycle takes about 2 months to complete. Under favourable conditions a nest may persist for several years.