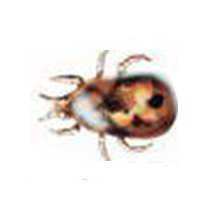 Characteristics: Usually less than 2 mm long. There is little evidence of segmentation. The body consists of the sac-like idiosoma and the gnathosoma, which carries the mouthparts and sensory organs. The mouthparts include a pair of 3-segmented chelicerae, which may be pincer-like or piercing. The idiosoma is rounded or oval and the dorsal surface sclerotized with shield-like plates.

Adults have eight legs, which are usually well developed, the front pair being employed as sensory organs rather than for walking. There is a single pair of spiracles opening between the second and third or third and fourth pair of legs. Metamorphosis is incomplete with egg, larval and nymphal stages.

A cosmopolitan species widely distributed throughout Europe. It is found naturally in wild bird nests, the small size of the mites making them ideally suited to a close association with birds. They feed on blood and are particularly associated with the nests of pigeons, starlings, sparrows, swallows and house martins. When the birds fledge and leave their nests the mites may disperse and infest nearby buildings including poultry units. Adult mites are resistant to dessication and starvation and can survive without food for several months. Extreme temperatures e.g. >45oC and -20oC are lethal and survival is best at higher relative humidities e.g. 70%. Red poultry mites are important pests in poultry units and appear in all types of production systems. Conditions in poultry houses are ideal for the mites and large populations can rapidly develop. The mites are nocturnal and spend the day resting in cracks and crevices where they are safe from predation by the birds. At night time they quickly move onto the birds and will feed for up to two hours. Freshly fed mites are bright red in colour but, as the blood is digested, they gradually turn darker and eventually become colourless. Mites can be introduced into poultry units from infestations associated with wild birds, with newly introduced poultry, on equipment, transport or clothing.

When the mites infest buildings they will attack people causing painful and irritating bites. Large infestations in poultry houses may lead to a number of problems including: Disturbance and stressing of the birds, which may be reluctant to use infested nests. Increased feather pecking. Anaemia, leading in severe cases to death.

Female mites lay as many as 40 eggs in batches up to seven at a time, 12-24 hours after taking a blood meal. The eggs are oval, cream-coloured and approximately 0.4 mm long. They are laid in nests, cracks and crevices around roost sites and hatch in 1-3 days to give 6-legged larvae. The larvae do not feed and remain inactive until they moult within two days to give 8-legged nymphs. Like the adults, nymphs take blood meals, usually during the night, and spend the day sheltering in cracks and crevices in and around the nests. There are typically two nymphal stages before they moult to become adults. Under favourable conditions the full life-cycle takes about a week.

Populations of Red poultry mites can establish themselves very quickly and, as infestations become deep-seated, they are difficult to control. Regular monitoring is important to ensure infestations are dealt with at the earliest opportunity. Mites may be collected from birds or resting sites, but the fact that they are not active during the day and hide in cracks and crevices means it may be difficult to measure populations. They can be expelled from harbourages e.g. equipment by tapping them onto sheets of paper.

Infested areas of poultry houses should be treated as soon as they are identified, paying particular attention to mite harbourages. Thorough treatments with acaricides should also be made when houses have been cleared and cleaned.