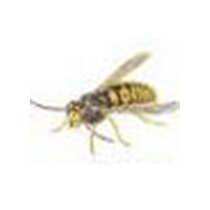 Characteristics: Up to 30mm long; eyes kidney shaped; two pairs of membranous wings, the hind wings smaller than the forewings and linked to them by a row of hooklets; wings folded longitudinally at rest; mouthparts adapted for chewing and licking; dorsal surface of the first thoracic segment extends back to a small lobe which overlies the base of the front wing; abdomen constricted at base giving appearance of a waist; metamorphosis complete, with egg, larval, pupal and adult stages; typically possess complex social system (sub-family Vespinae).

Wasps can be regarded as beneficial insects. As the nests develop during the spring and early summer the workers collect insect larvae, scraps of meat and even fish to feed to larvae. They therefore help to control insect pests and clear carcasses. The workers prefer high energy carbohydrates which they obtain from fruits and the nectar of flowers. They could act as pollinators although are unlikely to be as efficient as honey bees.

In general, however, wasps are regarded as nuisance pests or a threat to health.

They feed on fruits e.g. apples, pears and plums although they are regarded as scavengers extending the damage caused by other pests and diseases. The need to collect wood to construct nests means that wasps may damage the wooden fabric of buildings, fences and even perhaps garden furniture.

Wasps are a particular nuisance at the end of the summer when the workers are freed of the need to collect proteinaceous foods for their young and can indulge their passion for sweet materials e.g. jam and syrup. They cause a nuisance when they enter kitchens, bakeries and other premises handling sweet aromatic materials. Foodstuffs can be contaminated and staff will be disturbed or even stung. Where wasp densities are high and a real threat is perceived, production in workplaces can be halted.

It is the ability of wasps to cause painful stings that concerns most people. Unexplained road accidents have sometimes been attributed to the distraction of drivers by wasps. They are not regarded as particularly aggressive and the ability to sting is employed by the social wasps to defend their nests.

The sting is caused by the injection of venom into the victim by means of the modified ovipositor of the females. Unlike the sting of bees the wasp sting can be withdrawn from the victim. The venom is haemolytic, haemorrhagic and neurotoxic. Histamine is also present which causes the redness, flare and weal in skin.

Wasp stings around the throat may lead to respiratory obstruction. Alternatively they may be directly toxic causing faintness, respiratory difficulty, vomiting, diarrhoea and perhaps urticaria. These are only likely to appear following a mass attack. The main hazard is the risk of anaphylactic shock arising from repeated stings or even a single one which may lead to death.

Symptoms may appear rapidly and include respiratory distress, faintness, an itching rash, swelling of the face and vomiting with abdominal pain, cramp or diarrhoea. Medical assistance should be sought immediately where anaphylactic shock is suspected.

Stings can be treated with a cold compress and antihistamine creams applied within twenty minutes of stinging. A suitable antiseptic cream should also be rubbed into the skin to prevent infection.

Wasps are typically social insects with new nests constructed each year. The queens, which are larger than the workers, overwinter in harbourages in buildings, under loose bark or even in old nests. They emerge in the spring and will feed on nectar and sap. Nests are located underground, in buildings, trees or bushes and constructed of wasp paper made by chewing wood and other plant debris with saliva. First a canopy is fixed to the top of the nest location and then a central pedicel from which the nest is suspended. The queen then builds a layer of hexagonal downward-facing cells radially from the pedicel. Layers of wasp paper envelop the nest providing protection from the elements and conserving heat.

Eggs are laid in the first tier of the nest built by the queen. They are cemented into place and the emerging larvae, which hatch in a few days depending upon temperature, only partially emerge in order to stop them falling from the cells. The fully grown larvae construct silken cocoons and seal themselves into the cells in order to pupate. Four to six weeks after the eggs are laid the first generation workers emerge. These are female wasps but smaller than the queens and males which emerge later in the season. The workers then take responsibility for maintaining the nest. They extend it by adding further radial layers of cells suspended by wasp paper stalks below the first tier. In this way up to eight tiers may be constructed and the whole enveloped in wasp paper with the entrance at the bottom. If the nest overheats the workers ventilate it by vibrating their wings or even by introducing water droplets which cool it by evaporating. The workers also forage for food and in particular high protein foodstuffs for the larvae e.g. flies, caterpillars, spiders etc. In their turn the larvae exude a secretion which contains sugar and proteases. This is taken by the workers and provides a useful food supplement whilst also helping them to break down the proteinaceous foods destined for the larvae. This is trophallaxis a relationship in which both parties gain and which probably helps to ensure the workers allegiance to the nest.

As the workers develop the nest the queen devotes her time to egg laying. Each cell may be employed several times to rear larvae and by the end of the summer the nest may contain 20,000 or more wasps.

In the autumn, new queens and males are produced. The latter fertilise the queens who then search for hibernation sites. With the onset of severe weather the nests die out.

Measures to control wasps can be directed at the foraging wasps or their nests.

Nests can be located by searching likely sites on fine days for signs of wasp activity. Flight lines of foraging wasps converging towards, or diverging away from nests may be observed in order to pin-point the nests.

Ideally nests should only be treated with insecticides when activity around the nest is quiet.

Operators should wear suitable protective clothing including a veil, gloves and tight fitting sleeves and trouser cuffs. Other people should be kept away.

Nests can then be treated by: