(by the kind permission of bayer) 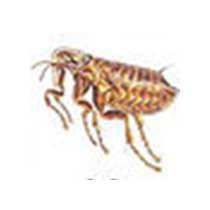 Adult fleas live exclusively as parasites of warm-blooded animals, especially mammals, although birds may also be attacked. Whilst they show a certain degree of host preference, fleas are by no means specific and will feed on other animals in the absence of the normal host. In fact they tend to be more nest than host-specific, for whilst the adults may feed on the blood of a variety of animals the larvae require more precise conditions which are associated with the habitats and nesting habits of the hosts rather than the characteristics of their blood.

Cat fleas are responsible for many flea infestations, the remainder being attributable to a variety of bird and animal species. Pulex irritans infestations are now uncommon. The significance of Ctenocephalides felis is explained by the increased number of pets being kept and the tendency for their beds to be neglected during cleaning. Wall-to-wall carpeting also provides a relatively undisturbed environment for flea larvae to develop, whilst the spread of central heating has served to ensure ideal temperature conditions.

Fleas can be vectors of disease or may transmit parasitic worms. The most serious infection which they can spread is bubonic plague, transmitted to man by rodent fleas (Xenopsylla cheopis) which carry the causative bacillus from infected rats. In the past rodent fleas have been responsible for serious epidemics of the disease, notably the Black Death in Europe and Asia in the 14th to 17th centuries. Rodent fleas may also carry murine typhus and, because of their readiness to attack humans as well as rats, are probably the major flea vector of disease. The dog flea is an intermediate host of the dog tapeworm (Dipylidium caninum), whose vertebrate host is usually the dog (occasionally the cat) but which can sometimes be transmitted to man.

In Europe fleas are not generally responsible for the transmission of disease. However, they are still objectionable because of the bites they inflict and the deep-rooted social stigma attached to humans with flea infestations. Occasionally psychological problems arise with the induction of delusory parasitosis, in which the victim imagines he is infested with ectoparasites.

Flea bites are identified as a tiny dark red spot surrounded by a reddened area. The bite persists for one or two days and is intensely irritating. First bites are not generally liable to cause serious reactions, but they may lead to hypersensitivity. Reactions are usually delayed following regular biting over a long period; there will then follow a period when reactions are immediate. The cycle then repeats until a state of non-reactivity - immunity - is achieved.

Flea eggs are about 0.5mm long, oval, pearly-white in colour and laid indiscriminately in the fur or feathers of the host or in its nest or bedding. They do not adhere to the host but readily fall from the animal, are shaken or scratched off. The same applies to the dark coloured faeces of the adult fleas thus creating the back and white - salt and pepper - effect associated with flea infestations. Four to eight eggs are laid after each blood meal and a single female may produce 800-1000 eggs during her lifetime, which may be as long as two years.

The eggs hatch in about one week to give white, threadlike, legless larvae 1.5mm long.

These are distinguished by an identifiable, usually brownish head without eyes; jaws adapted for biting; three thoracic segments and 10 abdominal segments all equipped with bristles; and peg-like processes on the terminal abdominal segment. The larvae thrive in dark, humid places such as animal bedding and carpet fluff, and feed on organic debris and adult flea excrement. The latter forms a valuable part of the diet as a source of blood, which some larvae, while not attacking the host, require for their development. Larvae may also be predacious, living on small and weak arthropods. Cats' bedding may support a flea population of 8000 immature and 2000 adult forms. A typical flea infestation may be composed of adults 5%, larvae 35%, pupae 10% and eggs 50%.

After 2-3 weeks, by which time they will have moulted twice and be about 5mm long, the larvae spin silken cocoons, incorporating debris, in which to pupate. The cocooned larvae then moult within three days to give the pupae which are initially creamy-white but change to dark brown as they mature to become adults. This phase is the quiescent stage and the flea may overwinter in this state. The adult flea will then be stimulated to emerge by the vibrations set up by a passing host. This explains the occasional mass attacks which take place in deserted premises.

The development cycle from egg to adult is normally completed in 4 weeks but at low temperatures will take much longer.

Selecting flea control measures depends to a large extent on the size of the problem. In many instances infestations of well kept houses can be easily traced to pets. Where this is not the case it is useful to establish the pest species. This will help to identify possible hosts and even the foci of the infestations. Control measures must be directed at the brood as well as the adult fleas.