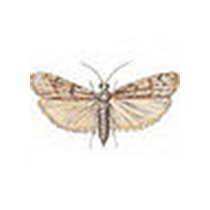 Moth larvae can cause considerable damage to stored goods by feeding or by contamination with their own products e.g. webbing and frass. Adult insects are not responsible for the damage as they either feed on liquid food and water or do not feed at all. The larval by-products, webbing and frass, are a particular problem. Webbing can entirely coat commodities and may be responsible for blocking machinery and ducts. The problem is exacerbated when webbing becomes mixed with frass, food and general debris.

Larval development is greatly influenced by the environmental conditions of temperature and food supply. The larvae themselves are unique and readily identifiable: well-developed head; clearly segmented body; three thoracic segments, each bearing a pair of five jointed legs; ten abdominal segments; numbers 3-6 bear false feet (prolegs), the tips of which are equipped with crochets; segment ten bears one pair of claspers.

The method and timing of control measures against moths, depends upon the species involved. The larvae are frequently difficult to reach because they are concealed in foodstuffs or the fabric of buildings and may be obvious only when they migrate.

Adhesive traps are used for trapping stored product moths. Attractant capsules containing a pheromone are attached to a sticky surface on which the moths are caught and which is partially protected from the environment. The trap is then suspended ca 2-3m above the floor. They perform best in locations which are not dusty. Alternatively funnel traps may be used. These are usually constructed of plastic and incorporate a funnel system leading to a retaining chamber in which moths are trapped and killed using a toxicant strip, water or detergent. They incorporate a pheromone lure and are particularly useful in dusty locations. The simplest traps are a dish of water containing a little detergent. Whatever system is employed adequate records must be kept.