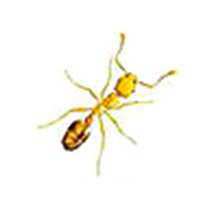 Originated in the North Africa/Mediterranean region. Spread along international trade routes and now widely distributed. Their need for warm humid conditions means that in temperate lands they are confined to buildings. Infestations can be found in a wide variety of locations including residential blocks, hotels, hospitals and other institutions, food handling premises, zoos and on board ship. In warm climates infestations can be found outside.

The insects may be associated with the fabric of buildings (e.g. wall voids, windows, storage areas etc.), plants and sterile supplies. Infestations spread through buildings by way of service ducts (e.g. heating and electrical conduits). The ants will forage for water around sinks and where condensation has occurred (e.g. windows, walls, etc.).

The ants can survive low temperatures for prolonged periods with the workers continuing to forage for food. The minimum temperature for success is 18oC and the colonies thrive at 30oC. Infestations in buildings are relatively unaffected by the seasons although may be encouraged when heating systems are switched on during the winter.

Worker ants are a nuisance as they forage widely for food and water following scent marked trails. Although omnivorous they tend to prefer proteinaceous foods. They will feed on meat, cheese, fats, sugar, honey, jam, chocolate etc. In hospitals they will also feed on blood, intravenous diet fluids, the fluid associated with wounds and vomit. Dead insects, mice and mouse droppings can also provide food for the ants. Clothing and laundry may be infested.

Pharaoh's Ants pose a risk to health. Pathogenic organisms may be transmitted mechanically as the ants feed in unhygienic places including drains, refuse bins, wound dressings etc. Their ability to infest sterile supplies in hospitals is of particular concern.

Pharaoh's Ants are social insects and live in colonies. These range in size from a few dozen to 300,000 ants. Colonies consist of: workers (sterile females), fertile males and queens (fertile females). There are usually many queens in a colony (multiqueen colonies) and they co-exist amicably. The queens can be replaced so colonies will survive indefinitely.

New colonies are typically formed by budding and may be encouraged by disturbing nests. Adult ants are responsible for this process which may include queens. Worker ants carry larval stages to a new nest site from which they can rear queens and males. Temporary nests may be established whilst the workers search for new sites. If established in mobile equipment infestations can be widely distributed.

The workers provide food for the colony and maintain the nest. Only 5-10% of workers are actually engaged in foraging. Fertile males and females develop from well fed larvae. Flying swarms are never seen, mating takes place in the nests and interstices of buildings. Each queen produces up to 350 eggs. These hatch in about a week to give legless larvae which are fed by the queens and tended by the workers. Larval development takes approximately three weeks. The pupal stage lasts about nine days. The whole cycle from egg laying to adult takes about 5½ weeks depending upon temperature.

Successful control of Pharaoh's Ants requires the destruction of nests. This is difficult to achieve because nests are often located in inaccessible places. The most effective control measures involve a thorough insecticide treatment so all the insects constituting the infestation will be exposed to the toxicant within a short space of time. This is best achieved by baiting but conventional insecticide treatments may be necessary to effect a rapid control of ants in some situations or establish perimeter treatments to protect areas from ant immigration. However, conventional treatments alone are of limited value for the control of Pharaoh's Ant nests.

Surveys must be conducted to determine the extent of the infestation. These should involve visual assessments and the collection of information about the distribution of ants from clients. Additionally a survey can be conducted by baiting. Baits may be based upon various materials including honey, sugar and meat (e.g. raw liver).

Once the extent of the infestation has been identified the insecticidal bait can be applied. It is recommended that bait placement commences outside the infested area and progresses inwards until the whole area has been treated. Care must be taken to ensure no pockets of infestation are missed during the treatment. The success of the treatment can be determined by further surveys.