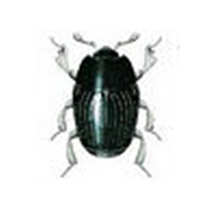 Carcinops pumilio is widely distributed in temperate regions and will naturally colonise the manure in poultry houses. It prefers the drier areas, exhibits a preference for the crest of the manure and is often associated with the spillage of meal. The insect is a late-stage coloniser of the manure, which is probably due to its preference for drier conditions. It may take several weeks for significant populations to develop. Adults are adapted for digging and will tunnel the manure.Carcinops pumilio tolerates a wide range of physical conditions and larval colonies have been encountered at temperatures well in excess of 30oC. Populations will occasionally disperse in response to some environmental factor.

The adults and larvae are predators of insects and mites. They may also feed on manure and other rotting materials. In particular they feed on housefly eggs and first stage larvae. Adults are reported to consume up to 24 eggs per day and, even at relatively low densities, up to 54 immature forms of fly per day, so making a useful contribution to control. Carcinops pumilio is therefore regarded as a beneficial insect. The manure dries as it is tunnelled and aerated by the beetles. This makes it less attractive for the flies to lay eggs and for the fly larvae to develop, so effecting a further measure of control. The dried manure is also easier to clear. Salmonella spp. and parasites e.g. tapeworms may be transmitted by the beetle.

Female C. pumilio lay their eggs in manure with a moisture content ca 50%. The eggs are about 1 mm long, smooth, creamy-white and slightly convex. They hatch to give cream-coloured larvae with dark brown heads. There are 2-3 larval stages and the fully grown larva is ca 6.5 mm long. It constructs a resilient cocoon in which to pupate and may utilise empty housefly puparia for the purpose. The pupa is initially creamy-white in colour but turns black with time. The full life cycle takes about one month depending upon conditions and the adults are long lived.

The following factors are pertinent to the use of C. pumilio for the control of houseflies in poultry houses: Houseflies thrive in manure with a moisture content of 50-85 %; they are unlikely to breed in manure with a moisture content below 30%. C. pumilio thrives in manure with a relatively low moisture content. Staggering the removal of manure and/or leaving some manure when clearing a house preserves beneficial insect populations. When seeding poultry houses to introduce populations of C. pumilio be alert to: Their potential to transmit diseases e.g. Salmonella spp., and parasites e.g. tapeworms. The introduction of other pests e.g. Hide Beetles. C. pumilio can be trapped for re-location to other parts of the farm. Commercially reared C. pumilio may be available for release into suitable manure at a rate of e.g. 10,000 insects per pit. Care should be taken when planning the use of insecticides in poultry houses to ensure C. pumilio populations are not detrimentally affected.