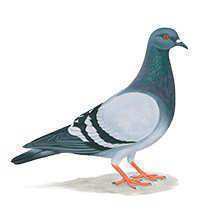 Color: Varies but commonly gray with a whitish rump, two black bars on wing feathers and a broad black band on the tail; red feet

Pigeons are monogamous and will lay one to two eggs which hatch within eighteen days. Young are fed "pigeon milk" which is regurgitated food from both males and females. While mating occurs year round, the peak mating seasons are spring and fall.

Pigeons prefer grains for food and people will commonly feed pigeons unintentionally by spilling food or it in open trash containers. Pigeons roost in areas above ground and will readily nest in steeples, as well as voids on outside areas of buildings and other protected areas.

Pigeons are dependent on humans to provide them with food, roosting and nesting sites. They are commonly found around agricultural areas as well as warehouses, feed mills, and grain elevators. They are also commonly found in cities around parks, buildings, bridges, and any other structures.

Pigeons are filthy birds, causing disease and damage. Their droppings are known for triggering human slips and falls, as well as accelerating the aging of structures and statues. More seriously, pigeons may carry diseases such as cryptococcosis, toxoplasmosis, salmonella, food poisoning, and more. Also, their droppings may harbor the growth of fungus which causes histoplasmosis. Other pests may live on these birds, including fleas, lice, mites, ticks, and other pests. Pests may also infest nests such as stored product pests.

Homeowners need to make roosting and nesting areas inhospitable. Filling in access to voids, sloping resting areas, and preventing landing by using devices will help. Scare balloons, plastic birds, or plastic snakes rarely work except for a very short period. Keep all food and standing water out of reach of pigeons. In commercial settings, do not pigeon feeding.