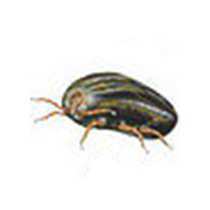 Caracteristics: Arthropods with a sac-like body ranging from 3-30mm long. They are the largest Acarines. The head, thorax and abdomen are closely fused and unsegmented. The body consists of the idiosoma and the gnathosoma (capitulum) with mouthparts consisting of a pair of chelicerae for cutting the skin of hosts, a central hypostome (beak) armed with recurved teeth which help to anchor the tick to its host and a pair of sensory palps. The idiosoma is membranous or leathery and sometimes equipped with a scutum (shield). There is one pair of stigmata (eyespot) with a stigmal plate near the legs. Adults are typically eight-legged.

With a dorsal scutum which covers the whole dorsal surface in males but only developed anteriorly in females to permit distension of the body with blood and eggs. The hind end of the scutum is sometimes grooved. There is a prominent gnathosoma which is visible from above. The stigmata are situated behind coxae IV. A pulvillus (sticky pad) is situated at the extremity of each leg. Examples are:

No scutum and mouthparts not visible from above. The cuticle is granulated and appears shrivelled when the tick is starved. The stigmata are usually located between coxae III and IV. There is no pulvillus (sticky pad) on the extremity of each leg.

There are over 850 species of tick. They are all blood-sucking parasites of vertebrates, principally mammals and birds but sometimes reptiles and amphibians. They are cosmopolitan and distributed across a wide range of habitats.

Ticks can survive long periods of starvation which is a useful characteristic where hosts are limited. Periods of starvation ranging from 3-21 months have been variously quoted for nymphs and adult Rhipicephalus spp. and Ixodes spp. whilst A. reflexus is reported to be capable of surviving for at least five years without food.

The Ixodidae are usually active by day and are typically three-host ticks, the larvae, nymphs and adults all spending time, often separated by extended periods, on different hosts. They are referred to as "ticks of the host" because they spend much of their active life on hosts. The adult females typically feed only once.

The need to take blood meals makes ticks important in terms of nuisance, the direct effect loss of blood has on a host and their potential to act as vectors of disease.

Tick bites as such are not generally serious. Anti-coagulin agents in tick saliva can, however, lead to haemorrhages. Heavy infestations of A. reflexus can cause the death of pigeons as a result of the loss of blood. In some cases the skin reacts to form a cup-like cyst which will cover the tick. Particular problems occur where the bites cause irritation or become infected. I. ricinus will bite man, I. hexagonus only rarely bites man whilst A. reflexus bites pigeons in preference to man.

Tick paralysis can arise from the bite of ticks such as I. ricinus. It is caused by toxic saliva produced when females are developing eggs rapidly. Ascending motor nerve paralysis can lead to death when respiratory muscles are affected. If the ticks are removed at an early stage recovery is generally rapid. The problem has been recorded in Europe in cattle and sheep and there is a potential threat to children depending in part where the bite occurs.

Ticks can transmit a variety of diseases and arise particularly from wild animal reservoirs. The ticks are not affected by the pathogens. The following are examples of some disease which are encountered in Europe

Female Ixodidae ticks feed once increasing body weight up to 150 times. A large batch of eggs globular, light brown and shiny in appearance is then laid in suitable harbourages and covered with a secretion to reduce dessication. The female then dies. The eggs hatch to yield 6-legged larvae which cling to vegetation awaiting a passing host. The whole brood may attach to the same host. When fully fed the larva drops to the ground and eventually moults to form an 8-legged nymph. Some species, the one host ticks, spend their entire life on a single host. Otherwise the process of attaching to the host will be repeated by the nymph and subsequently the adult. There is only one nymphal stage in the Ixodidae. The process is governed by temperature and the availability of hosts and may last several years. The opportunity to take three substantial blood meals means that given optimal conditions the life cycle could be completed in approximately six months so numbers of ticks eg R. sanguineus could build up very quickly.

In the case of the Argasidae ticks the females feed at intervals only increasing their body weight by up to three times. The globular, dark brown shiny eggs are then laid in batches of 20-50. The 6-legged larvae feed on the hosts for six to eleven days although the 8-legged nymphs and adults only feed for up to 12 hours. The nymphs may moult up to eight times. Those of some species produce a coxal fluid. It is believed to be separated plasma from the blood meal and may be infected with pathogens. The process is governed by temperature and the availability of hosts and extends from two to four years.

The method adopted for the control of ticks will depend upon the species involved and its distribution. Ixodidae ticks infesting areas outdoors can be detected by dragging a light coloured woollen blanket through potentially infested vegetation. Larva, nymph and adult forms will appear as small dark spots.

Protective clothing is important for those working outdoors in areas known to be infested with ticks. Clothing can be treated with suitable repellents. Boots and trousers should be worn and the trousers tucked into socks. Frequent inspections should be made to ensure that ticks have not attached themselves. If ticks are found attached to the skin care should be taken when removing them to ensure the capitulum does not remain behind. They can be removed by touching them with a suitable volatile solvent pressing them inwards to disengage the teeth before removing them. Alternatively they can be soaked with medicinal paraffin or olive oil and removal attempted some hours later.

The wide distribution of ticks outdoors means control measures are usually limited to restricted areas eg parks and other recreational areas. The availability of resting sites and the habitats of hosts can be restricted by cutting vegetation and removing debris. Infested vegetation can be treated with suitable insecticides exhibiting acaricidal and residual activity. It is important to ensure adequate penetration and coverage of the vegetation.