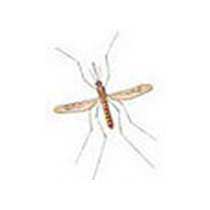 Characteristics: Metamorphosis is complete with egg, larval, pupal and adult stages. There are about 3000 species of mosquitoes in the world.

Note: There are several other Genera of mosquitoes some of which are implicated in disease transmission but others are of no risk to humans. Space does not allow consideration of all the other Genera here.

Mosquitoes are ubiquitous insects, they can be found in nearly every type of climatic region of the world from the arctic regions to the tropics, surviving severe winters or dry seasons depending on the region. Depending on species they can be found breeding in all types of water; from heavily polluted, to clean; from small collections of water in tin cans, to pools or streams; such is their adaptability. Their distribution is increased and aided by transport systems such as boats and aircraft and non-indigenous species have been introduced to new territories in this way, even infected mosquitoes have been transported to temperate climates, thereby transmitting tropical diseases.

Primarily a seasonal biting nuisance in cooler climates but in the tropics they can also be major vectors of disease. They can transmit many diseases to both humans and animals, e.g. malaria, filariasis, yellow fever, encephalitis, and dengue fever. Only a few species of mosquitoes are implicated as vectors of human diseases. It is those which utilise humans as their primary host and are also willing to enter houses in their pursuit of a blood meal which are the most important.

Some species do not feed on humans at all but utilise other mammals, birds or even reptiles as their hosts.

Statistics show that 270 million people are infected with malaria alone and of those up to two million will die annually. It is this that makes the mosquito the most dangerous creature in the world.

The mosquito mates within 48 hours of emergence from the pupa. The female only mates once in her lifetime, because she is able to store the sperm in sacs within her body and fertilise subsequent batches of eggs herself.

Most mosquitoes feed from sunset onwards; both sexes feed on nectar or fruits for sustenance but the female usually requires the high protein content of blood to produce eggs and soon after mating she will go in search of a blood meal. The female has powerful sensory organs which are able to detect body smell, carbon dioxide, warmth and moisture emanating from the host, she follows these stimuli upwind until she locates the host. Adults can fly several kilometres in search of food but can disperse further when carried by the wind.

The female pierces the host's skin with her mouthparts and locates a blood vessel from which to suck blood. She takes approximately her own bodyweight in blood at each feed. While feeding, saliva which contains an anti-coagulant passes into the wound to stop clotting and keep the blood flowing. It is the host body's allergic reaction to this which causes the irritating marks left behind.

The blood meal stimulates egg production and provides the nutrients required for the eggs to develop. They are fertilised from stored sperm just before they are laid, between 30-350 eggs are laid in each batch, depending on the species. They are spindle-shaped averaging 1.5mm in length and are laid either on surfaces surrounding the water's edge or in small floating rafts of eggs glued together or laid singly and scattered over the surface of the water, depending on the species.

Eggs hatch after several days and the first stage larva swims free. The larva feeds by the action of mouth brushes which cause a current of water to flow past the mouth bringing with it organic particles. They will also browse on algae or plants. Culicine larvae obtain their food at various depths but the Anopheline larvae feed only on substances floating on the surface of the water. Culicine larvae hang from the surface of the water by their breathing siphon in contrast to Anopheline larvae which lay horizontal to the surface. The larvae pass through 4 developmental stages or instars, at the end of each instar the larva sheds its skin or moults.

When the 4th instar larva sheds its skin it becomes a pupa. The pupa does not feed but remains at the water's surface. When disturbed they dive with a jerking motion returning to the surface passively.

The adult mosquito develops within the pupa. When it is fully developed the pupal skin splits along the dorsal surface and the adult emerges. Within a short time when the cuticle has hardened and the wings expanded, it will fly off.

The adult's life expectancy is not usually more than a few weeks unless it is in diapause. During its life however the female may lay several batches of eggs each containing several hundred eggs.

The length of the complete life cycle is very dependent on temperature and can range from 10 days to 6 months or longer in those species which overwinter as larvae.

Control measures can be directed against the larvae or adults.