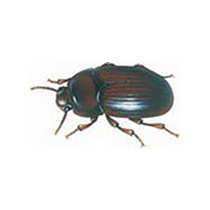 A cosmopolitan species thought to have originated in sub-Saharan Africa. In temperate areas they are typically found indoors although, being reasonably cold tolerant, they will survive in unheated buildings. The Lesser mealworm beetle is widely distributed in animal houses and especially poultry houses where the conditions reflect those of its tropical origin. Infestations are encountered in deep-pit and deep-litter poultry houses.

They are associated with a variety of stored products. Infestations in animal houses may be introduced by way of contaminated feed. The insects live in the manure and litter of poultry houses and are often associated with the feed and water lines.

Lesser mealworm beetles will infest a range of stored products including cereals, farinaceous products, oilseeds, groundnuts and bones but are not regarded as major pests. They are associated with cereal grains, which have previously been damaged by e.g. moulds and, where infestations are encountered in residues, indicate poor hygiene.

They are of particular significance in animal houses, especially those where poultry and pigs are kept. The following problems may be encountered: Transmission of diseases and parasites. Lesser mealworm beetles are vectors and reservoirs for a variety of poultry diseases including Marek"s disease and Newcastle disease. They are intermediate hosts for tapeworms, roundworms and protozoan parasites and can transmit the causative agents of bacterial diseases e.g. Salmonella spp.

Allergic reactions may be triggered following the exposure of people to the quinones released by the insects as a defence reaction. Welfare of poultry. The birds are disturbed by the presence of the insects. They may feed on the larvae, which detrimentally affects their food conversion rate, runs the risk of intestinal obstruction and puts them at risk of ingesting harmful organisms. Young, weakly chicks may be attacked and killed.

Damage to the structure of poultry houses. The larvae will tunnel earth floors rendering them uneven and difficult to clean. Significant structural damage can be caused as the larvae excavate tunnels in which to pupate. Wall plaster, which is in poor condition, may be damaged. In particular, polystyrene, fibreglass and other insulation materials can be damaged resulting in a significant increase in heating bills. Litter may be rendered so powdery that it must be replaced.

Nuisance may be caused where beetles disperse to adjacent properties perhaps following the spreading of manure onto fields. The adults will fly if the temperature is sufficiently high and are attracted to artificial light. The beetles will consume housefly larvae although they are not generally regarded as a significant factor in fly control. They will also feed on the immature forms of Carcinops pumilio so reducing its effectiveness as a predator on houseflies. As a result of burrowing, they will aerate manure, causing it to dry and making it less attractive for houseflies to breed.

Females lay up to 400 eggs in manure, litter, cracks and crevices in buildings or commodities. The eggs are about 1mm long and sticky so are soon covered in debris and cease to be recognisable. They hatch within a week to give larvae, which are grey-brown in colour and exhibit a characteristic "tail horn". The larvae are very active, avoid light and feed on litter, manure, spilt food and even dead or weak birds. There are approximately 5-11 larval stages and dark banding becomes more prominent with time. The larvae are fully-grown after 1-2 months and may be up to 15 mm long. Mature larvae seek suitable sites where they can pupate. These include the fabric of buildings which they may excavate causing significant damage. The pupae are light coloured and hatch in about a week, to give adults which can live beyond a year. Under optimal conditions the full life-cycle takes about five weeks.

A variety of trapping techniques are available for measuring stored product beetle infestations. These include pit fall traps, bait bags, insect probe traps and adhesive traps. The population may be measured by counting larvae on the fabric of buildings e.g. walls and posts. Samples of insulation materials can be placed around buildings and monitored for the entry holes of larvae seeking pupation sites.